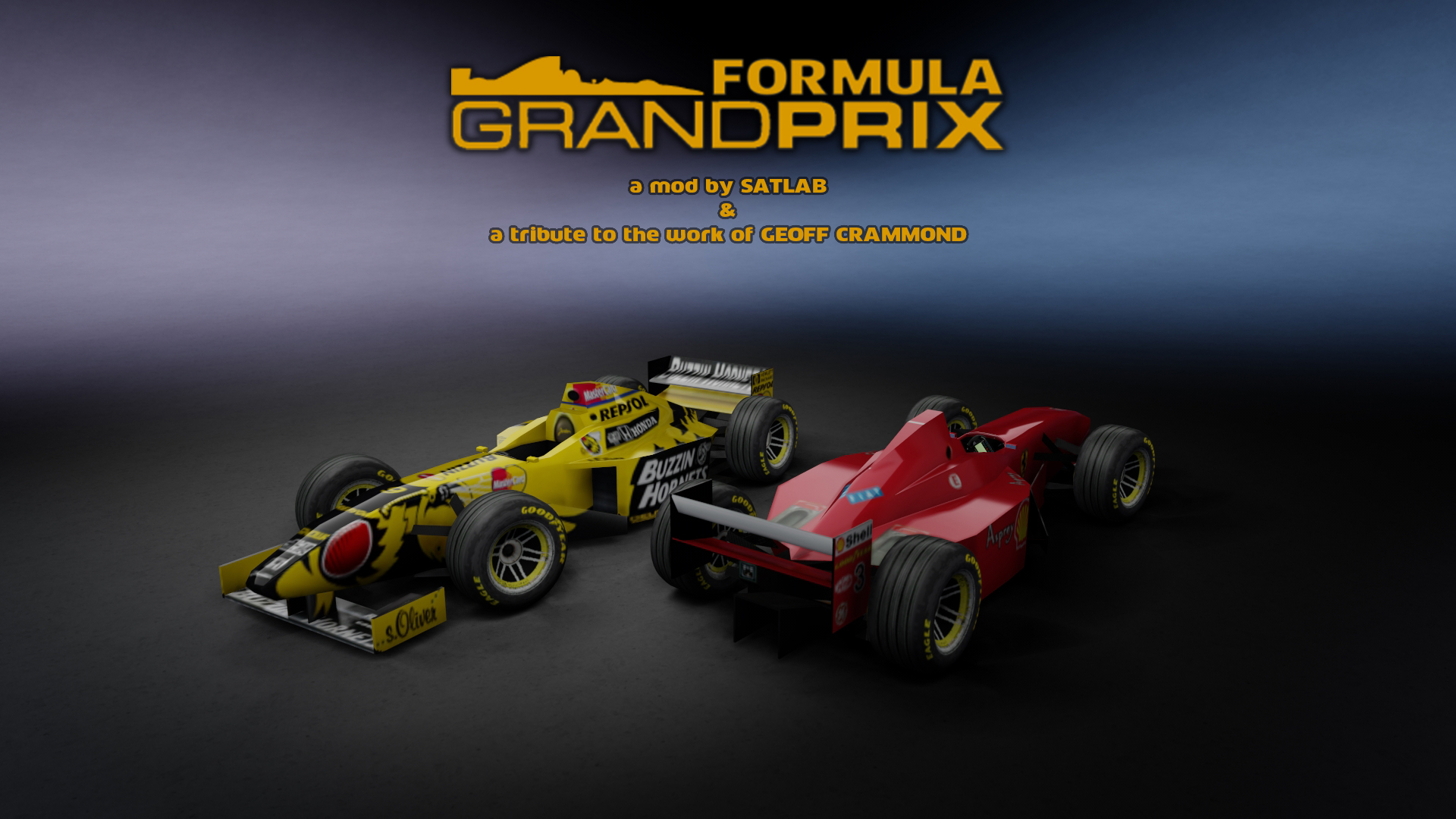 After a work of a couple of months I'm proud to present to you a "special" mod.

Formula Grand Prix is a generic Formula 1 © car which delivers over 800 bhp, with a 6-speed gearbox and a mid-high-downforce profile.

But what makes this mod "special" ? Well... the carshape, textures, performance, helmet, etc. are all based on the Grand Prix 3 game developed by Geoff Crammond and released by Microprose in 2000.

Hence the mod itself is a tribute to the Grand Prix series and the man behind it, Geoff Crammond.

The Grand Prix game series is well known for being one of the first F1 racing simulation. The series released his last chapter, Grand Prix 4, in 2002, leaving one of the biggest modding community around every game of the series. 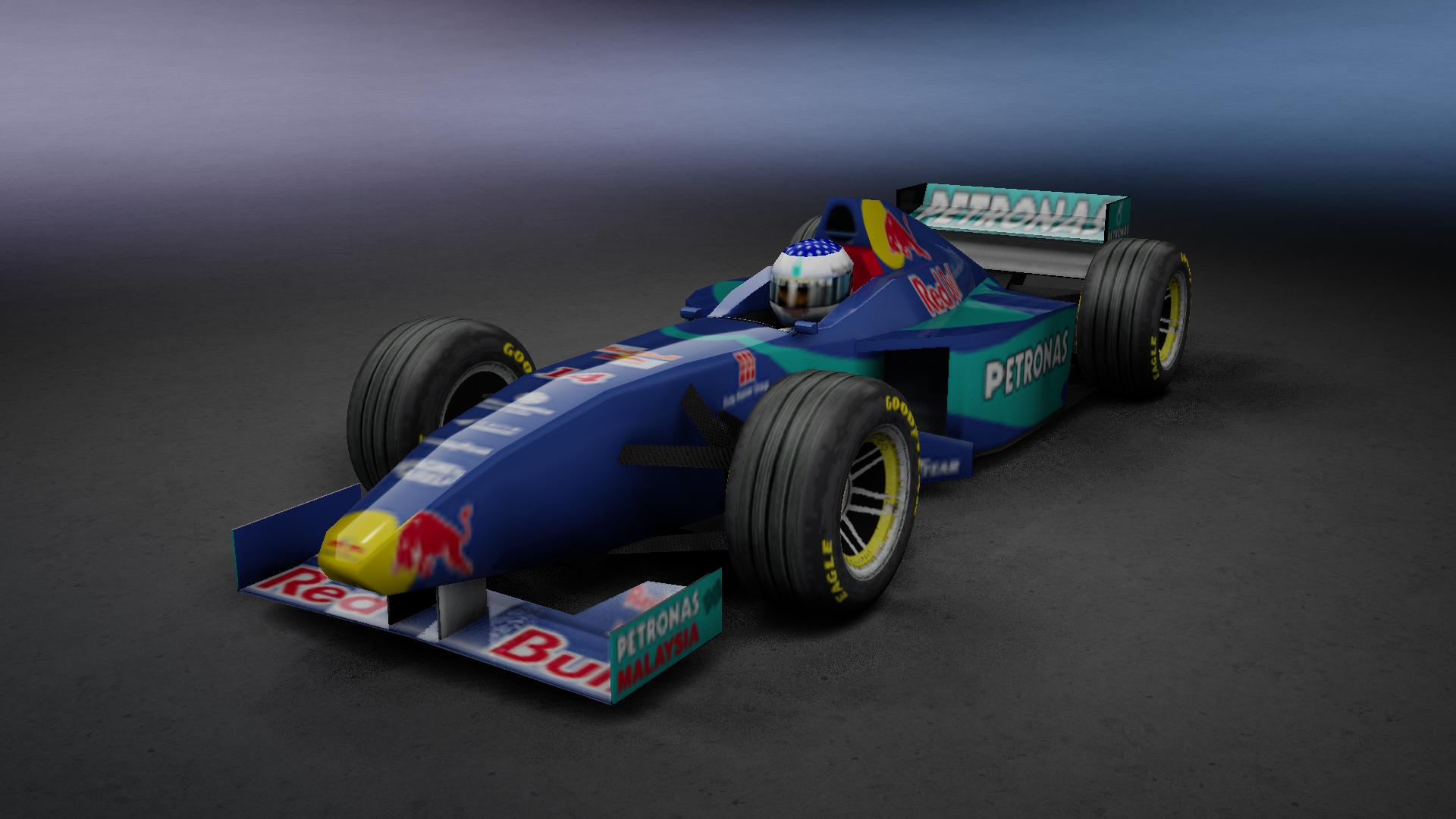 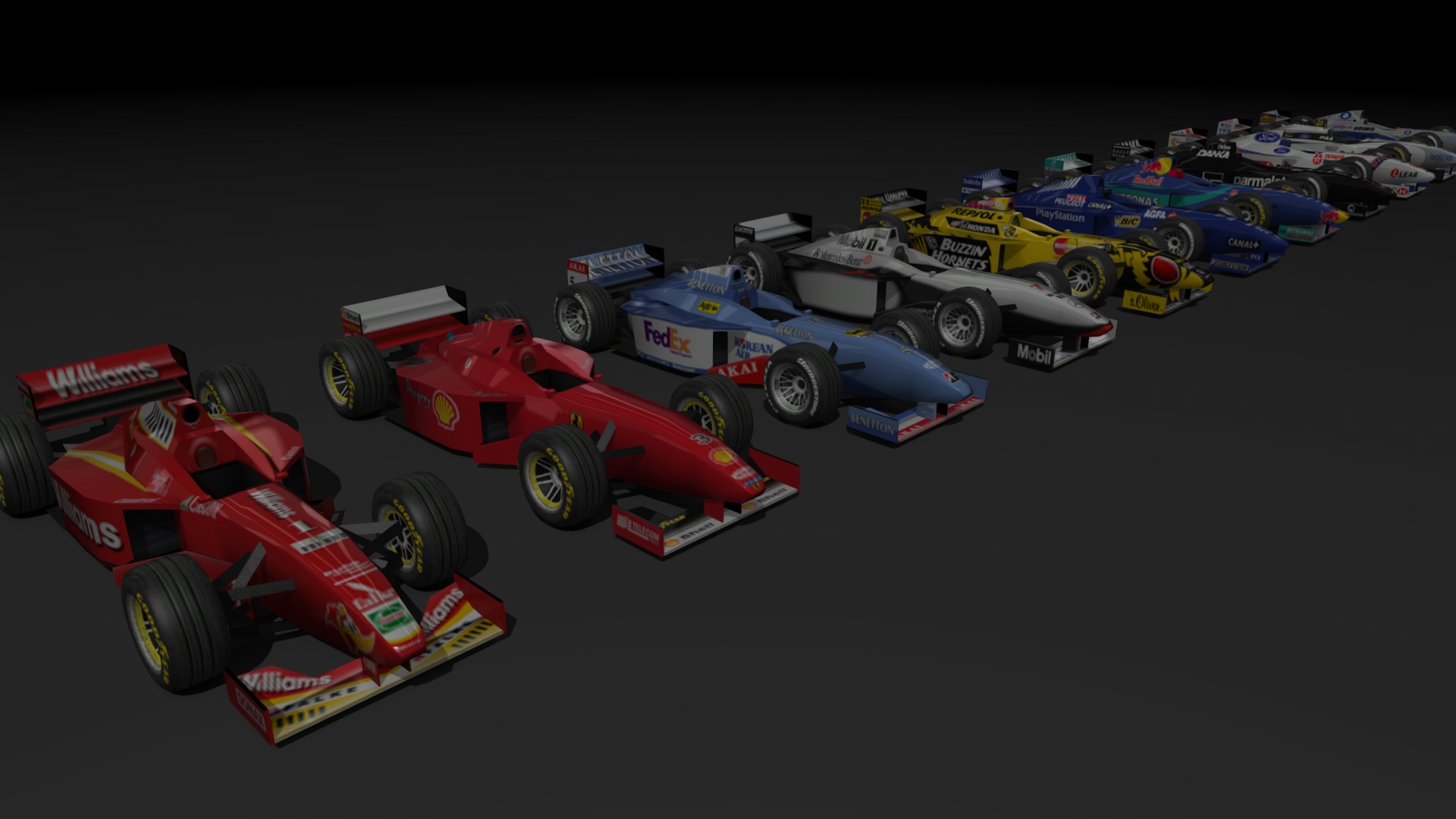 So... why did I choose Grand Prix 3 for the tribute?

First of all, this year is the 20th anniversary from the first release of the game.
Another reason is more "sentimental"... I spent thousands of hours on this game back in my childhood and it's a great pleasure to see it on a modern graphic engine.
Moreover... the GP3 carshape is well suited for an AC mod: GP4 would've been very difficult to replicate because every car is different from each other and it has much more polygons, GP2 instead was way too simple in his carshape and it wouldn't have looked nice in my opinion in a modern graphic engine.
So... in other words... GP3 was the best compromise between past and present.

The goal of this mod is to bring to you all the "fashion" and the "spirit" of the late 90s/early 2000s racing games. The model is exactly the same as the GP3 carshape (obv created by me from scratch) with the same textures. The same for the helmets. I tried to replicate a more "arcade-y" style physics closer to the original game (I didn't think too much about realism). The setup is very
simple, you can change just few things (aero front and rear, 2 slick tyres mesh, simple suspensions setup). The sounds are sampled from the original game.
The only thing that I modernized is the steering wheel... in the original game the cockpit and the steering wheel were a fake 3D/2D model; in this mod they are recreated in real 3D with high quality models and textures. 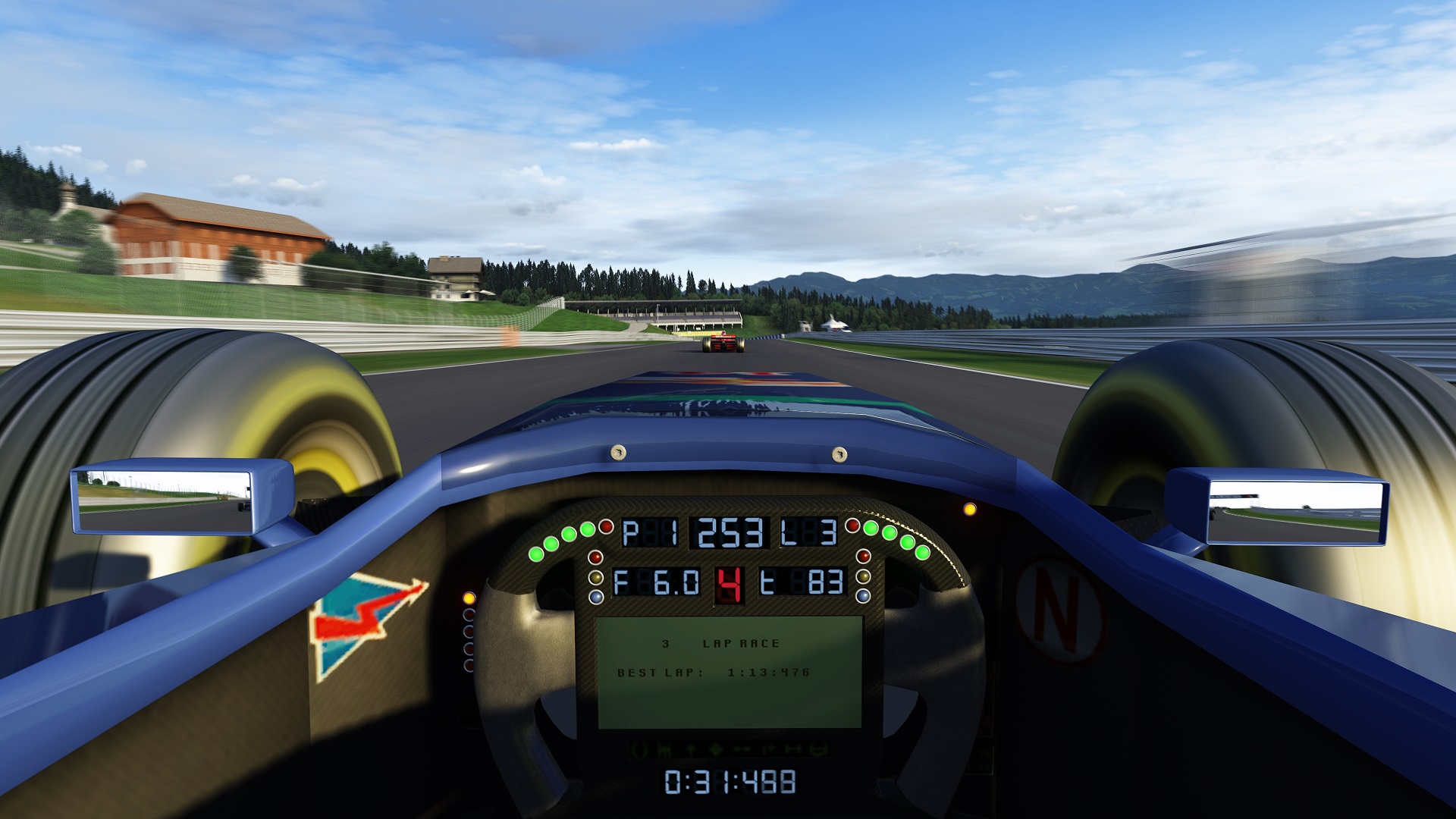 So the mod is just designed for fun and semplicity (the mod is also very light so if you have a low-end pc and you want an F1 alike experience this mod could be your choice).

I really hope you will enjoy it as I did

A special thanks also to @Whills which inspired me a lot in this project (he did the same but on rFactor and AMS... and his mod has also F1GP and GP2 ) 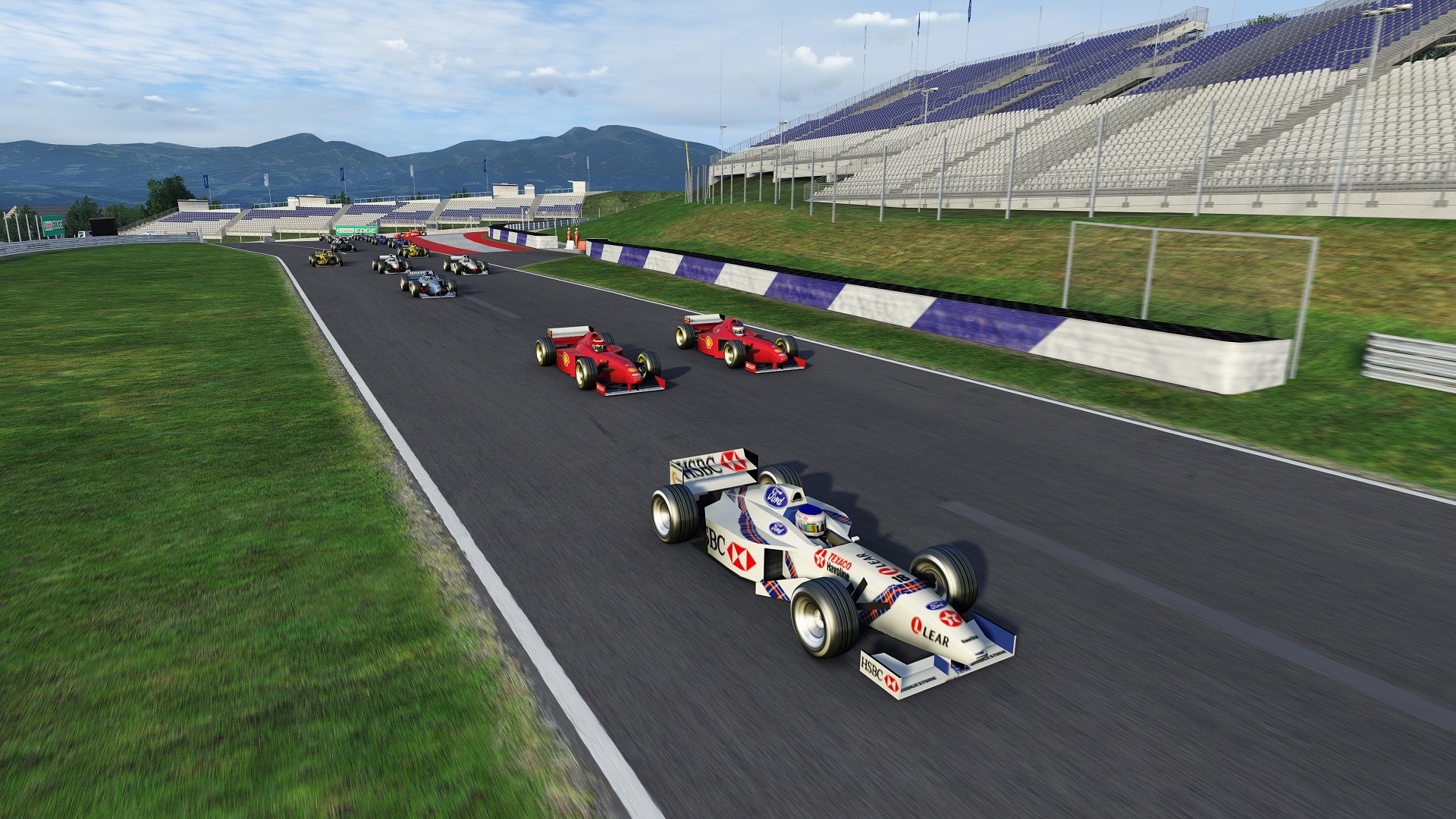 Making a mod from scratch it's a very hard work, if you liked it and you want to offer me a beer (or an espresso) you can donate at the following link: https://paypal.me/SATLAB?locale.x=it_IT

1. Copy the "content" folder from the compressed downloaded file into your assetto corsa directory.

Formula Grand Prix carshape has the same UV mapping as GP3 original carshape.
So if you would like to add other skins (real or fictional) from the GP3 moddding
community you can. All you need to do:

2. Convert it in PNG (you can use Paint for that)

3. Save it in your skin directory as liv.png


You can do the same also for the helmet skin... the only thing that changes is that you must save the
helmet skin as helmets.png

A big thanks to the GP3 modding community who provided me some important tools: 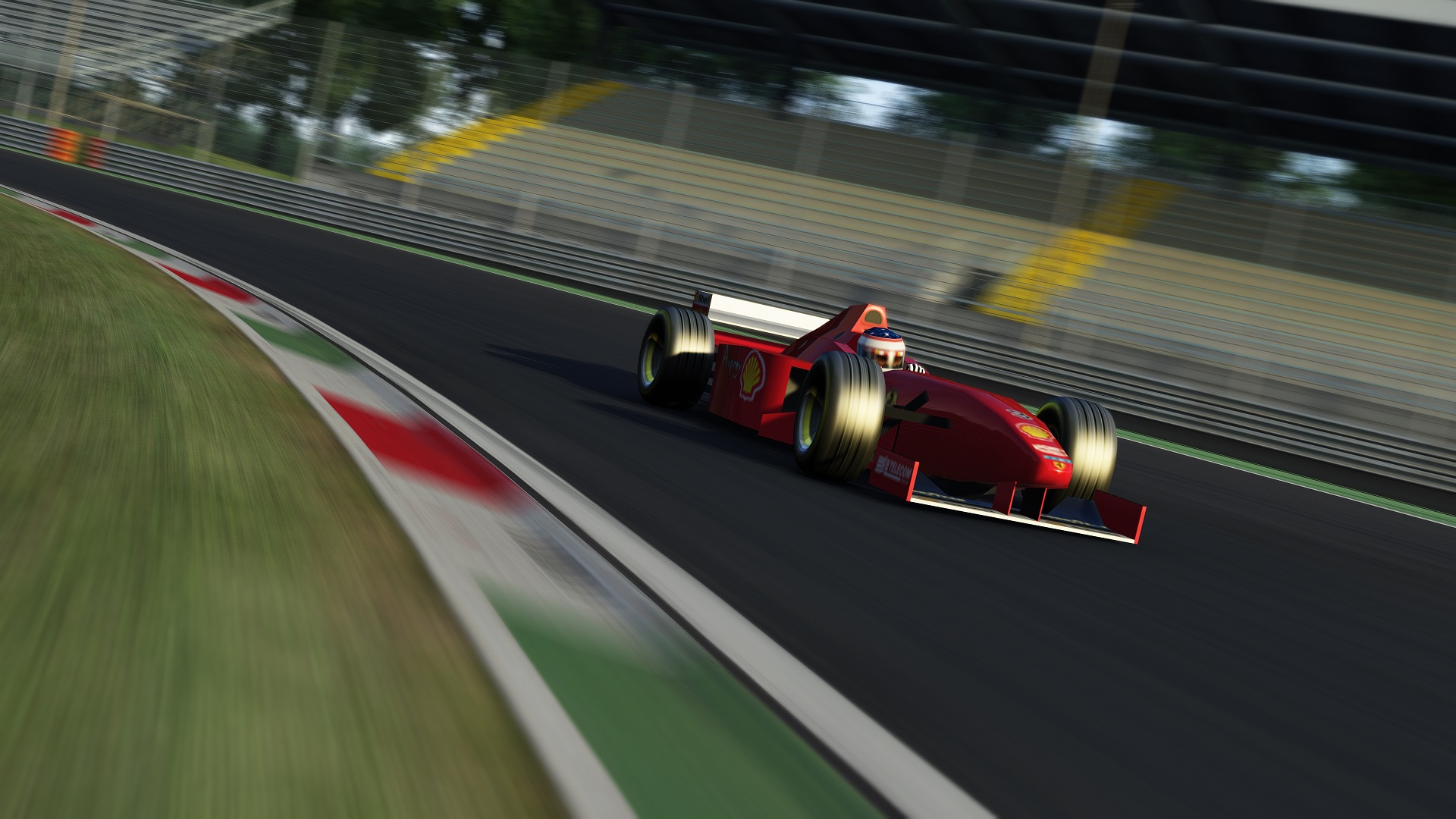 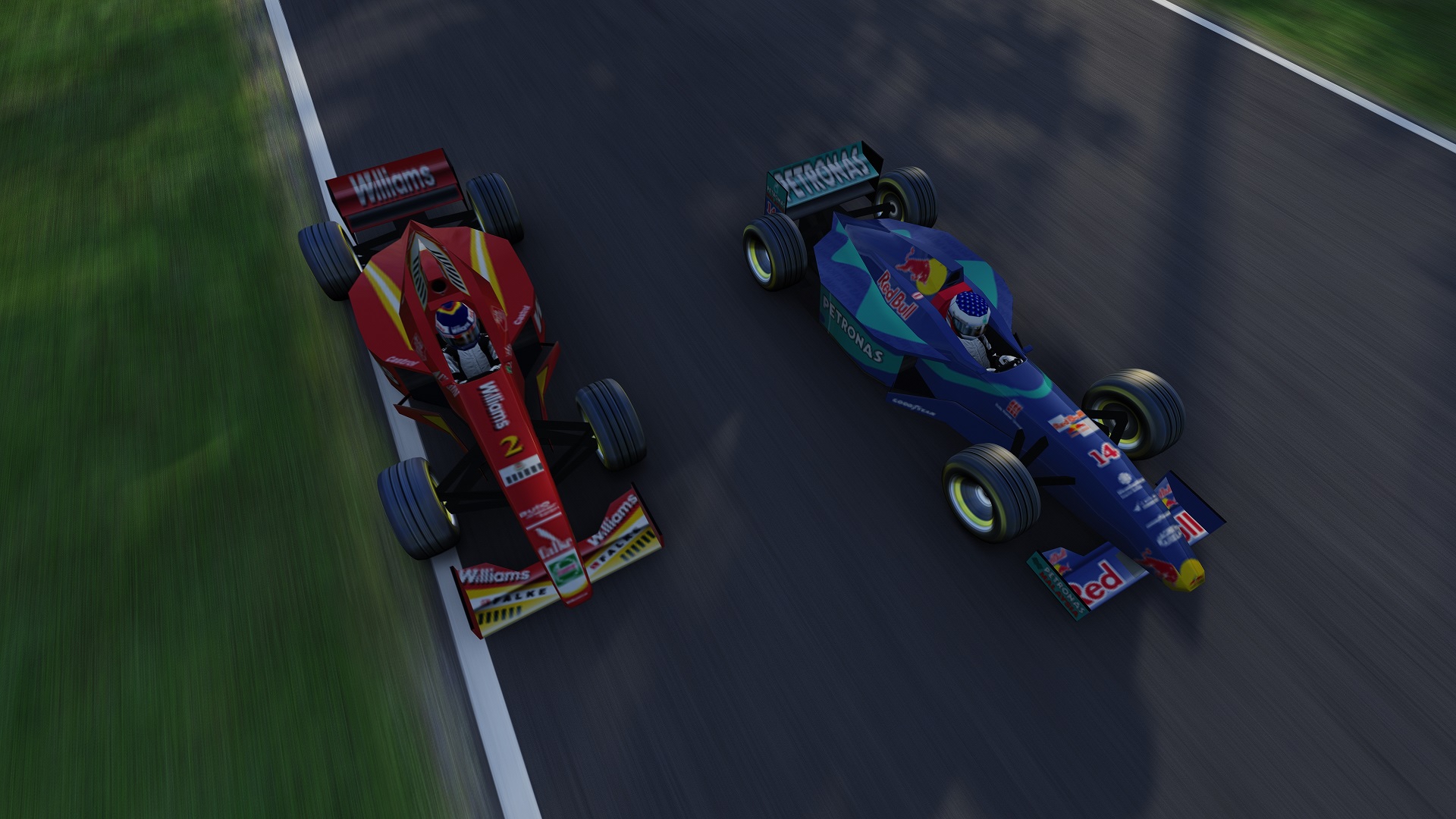 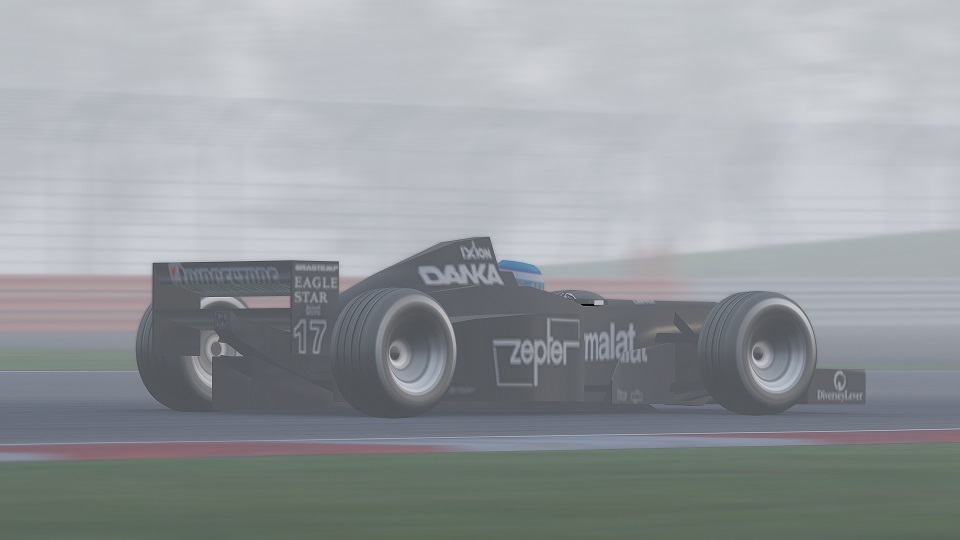 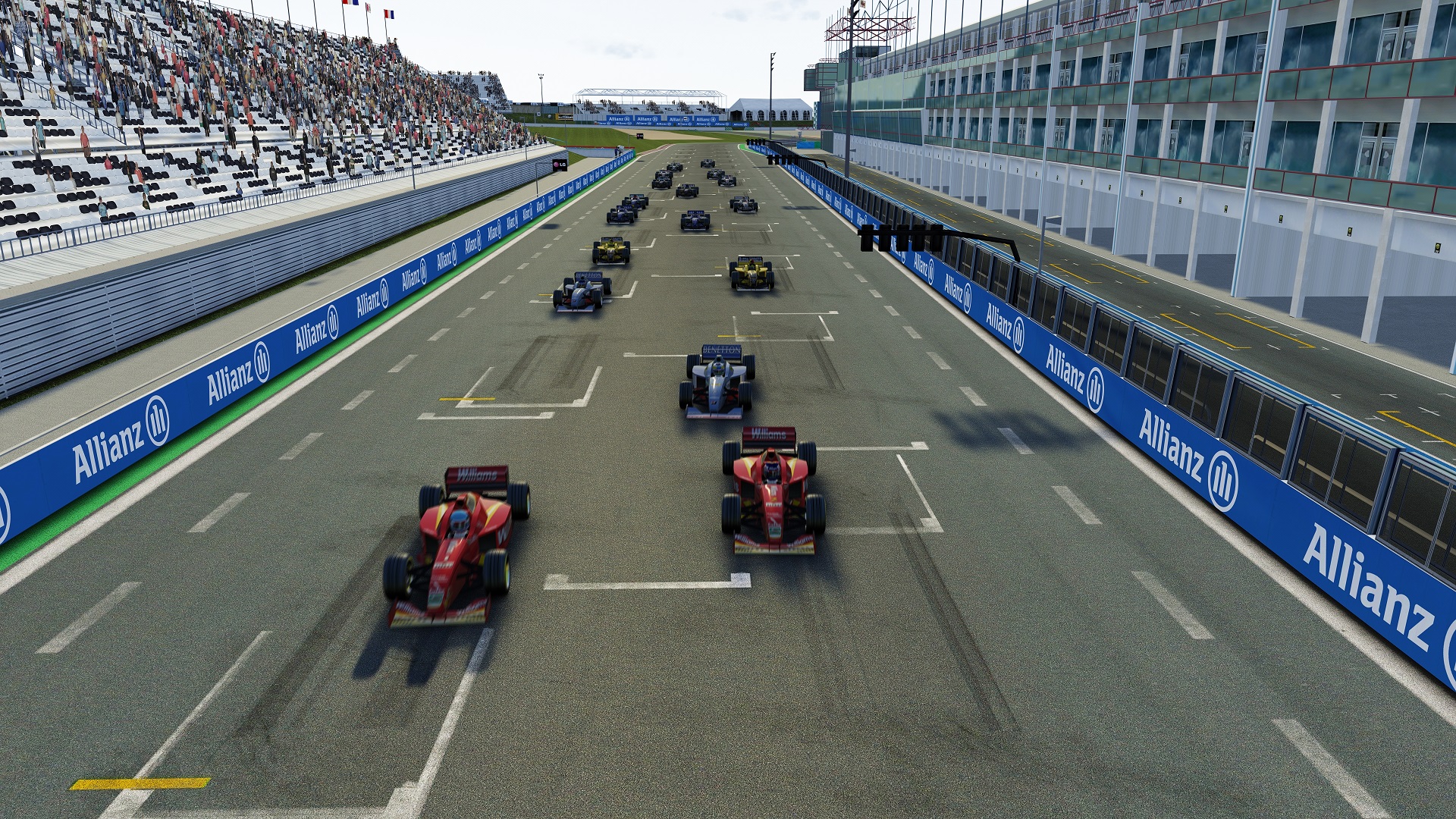 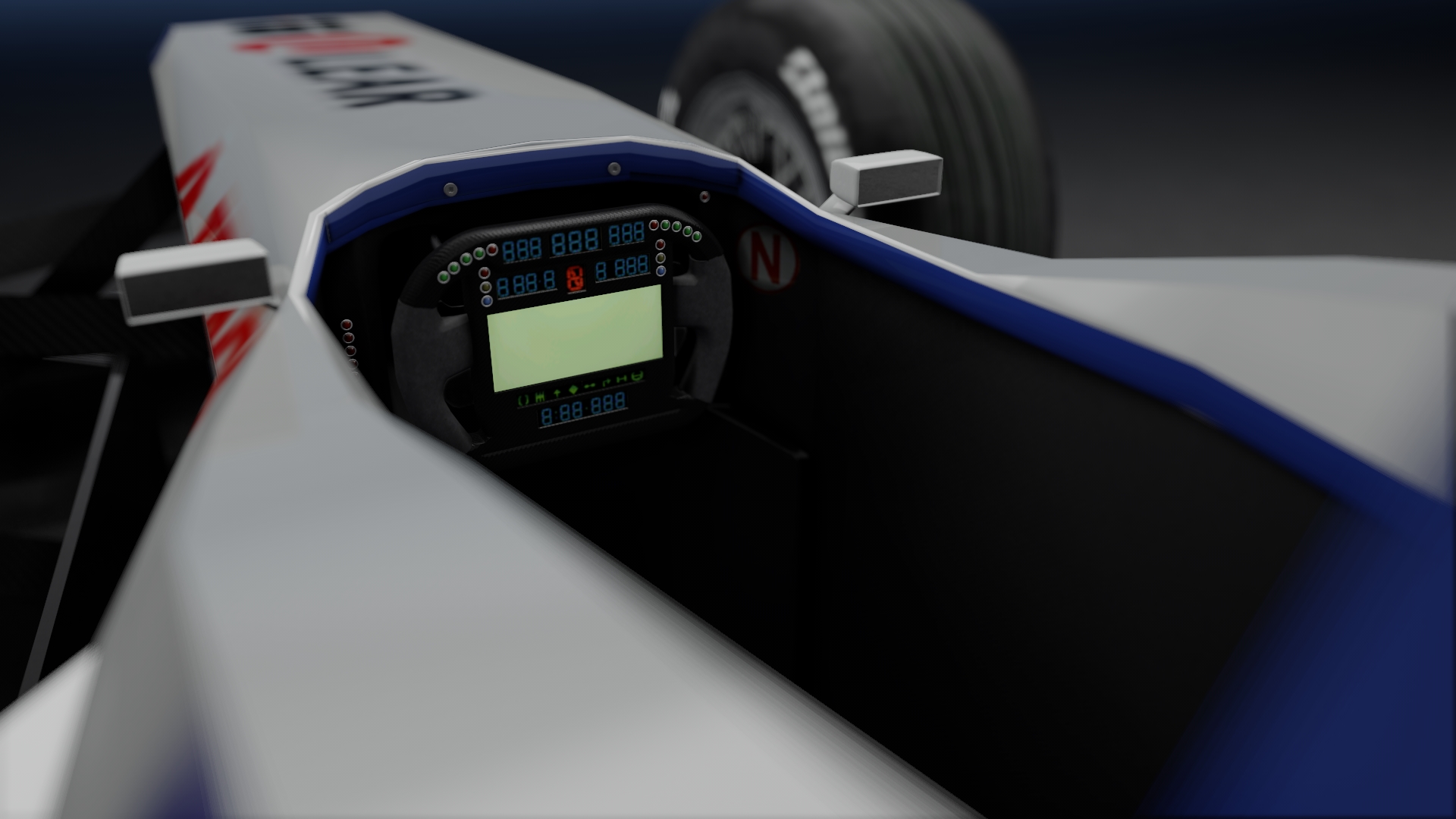 Hearing that classic GP3 sound as you accelerate for the first time is amazing.
Honestly. This is one of the best mods made for AC.

And the fact that you aimed for a more arcade-feel physics makes this one of the easiest, more enjoyable and an absolute blast to push the cars to the limit.

Congratulations. Any plans to make a "GP4 version"? (my personal favorite)

SATLAB90
Thank you very much for your kind words :)
Not planning a GP4 version but recently I released a Jordan EJ11 mod (which was a car in GP4) ahah
Probably one of the best mods I've seen for this game. The nostalgia is real and the fun is realer.
This bought back a flood of memories for me...5 stars. Well done. Thank you for making this!
This mod is the exact manifestation of what I remember was Grand Prix 3, when I was only 5 and played it for the first time. You always remember your gaming memories to be HD.. well now you have your GP3 in HD.

Car model feels great, just a little bit easy to drive in comparison with other 1998 cars mod (eg the McLaren by other modders), but sure is very enjoyable. 10 stars

SATLAB90
Thank you very much mate :)
Beautiful
A truly beautiful recreation of a classic car from a legendary game. It's amazing to drive these cars again but this time in more refined physics and even gorgeous graphics.

Thanks for this mod. The nostalgia alone definitely deserves more than 5 stars.

SATLAB90
Thank you very much :)
Beautiful tribute and fun to drive. Thank you for making it.

SATLAB90
Thank you very much :)
I never played the Grand Prix series but it's great to have a full 1998 F1 season in AC. The physics are a fun mix between simulation and arcade. Easily one of my favorite mods for AC!
Very good, graphics is what is it but the car is very good to drive. This was The F1 simulator which I bought first, it was my first step to Sim Racing world in 1999 when Mika Häkkinen won his second championships, thank you very much!!!
My life is now complete. First ever mod I've left a review for on RD. Weird request: any way you can get the original menu music to play in the game or menus? Any an even weirder one, will there be a chance the 'noise' heard when you first start a session on GP3 can be ported over? The iconic BEEP and then the engine starting sound :) 5/5 Best Mod

SATLAB90
Thank you very very much :) Glad you liked it!
I swear I tried to do all the things you mentioned but as far as I know the only possible thing will be to create a custom showroom which reproduce the GP3 menu music... maybe in a future update I will include it
Thank you for bringing back memories!
Althought not gonna make you angry or something like that i will like to see it also in a ''modern'' visual state :P

SATLAB90
Thank you very much!
Ahah don’t worry, it’s normal to want something “modern” after this. Hope to have a complete HD 1998 F1 models someday
Thanks, never played GP3, so I'm glad I can experience the cars in AC. Cheers!
A fantastic trip back in time!
It's great.
BRILLIANT! Back to 1998 we go! :D
Woow! I rememeber when I used to play GP3 with my friends at home, with hotseat multiplayer mode on my PC! If only I still had the hard disk with the skins we created that time...
Looks epic really catches that old school racing game aesthetic

SATLAB90
Thanks :)
Nice work!!!GP4 maybe are you planning?
Incredible formula car. Could use a little more 6th gear. Seems to run out a little bit. Thanx.