UPDATE NOTE: Version 1.1 uses a different car folder name than version 1.0. To be clear, russell_alexis_mk14 is the latest version.

What is a Russell-Alexis Mk.14?
Alex Francis and Bill Harris formed the original Alexis brand in the 1950s to produce small open-wheel vehicles for Formula Junior. In 1967, the Formula Ford spec series was finalized, and Jim Russell worked in concert with Alexis to manufacture one of the first series-specific chassis, the Russell-Alexis Mk.14, which were used at Russell's racing school.
Their primary competitor in 1967 was the Lotus type 51, which was a modified Formula Junior chassis. The main difference in the two was the Renault transmission used in the Lotus, which frequently failed, until the 51b replaced it with the same Hewland transaxle that the Russell-Alexis Mk.14 used. In 1967 and 1968 the Mk.14 won multiple national championships in Formula Ford.
The series proved popular and by the end of the 60s there were a half-dozen manufacturers producing quite similar vehicles, including the Alexis Mk.15. However, Alex Francis was no longer interested in the mass production of small-profit chassis and sold the business to Allan Taylor, who produced several more Formula Junior, Formula Three, and Formula Ford chassis in small numbers before closing the business in around 1972.

Physics
It's a 50 year old car, of which originally less than a hundred were hand built. The mod represents one of these as it would run in current vintage Formula Ford series. This means that some aspects of the physics are arbitrarily decided; for example, the tires and dampers are wear items and something plausible was provided, since users could replace them anyway. The two tire compounds are labelled North and East because they would be running in different series; North is a 90s Formula specific radial with a stiffer sidewall, East is a 60s generally available car tire - in the 60s road cars would actually run on 165/55s, by the 90s no new cars were using such a small tire. Both are a fairly hard long-wearing compound.
The default spring settings match period setups for the car, which are quite soft, but a wide range of spring settings are available.
The brake bias and antirollbars default to a fairly safe setup; even so on cold tires the car is happy to wander around the road.
The engine is a healthy 1.6L Ford "Kent" stock block and pushrod 8 valve head, as specified in the series rules. It probably has been fine tuned to more power than it had in 1967, generating over 100 horsepower, but to be fair, safety regulation changes have made the car heavier.
Gearsets are a fairly thorough catalogue of available parts for the Hewland mark 7 and 8 transmissions. 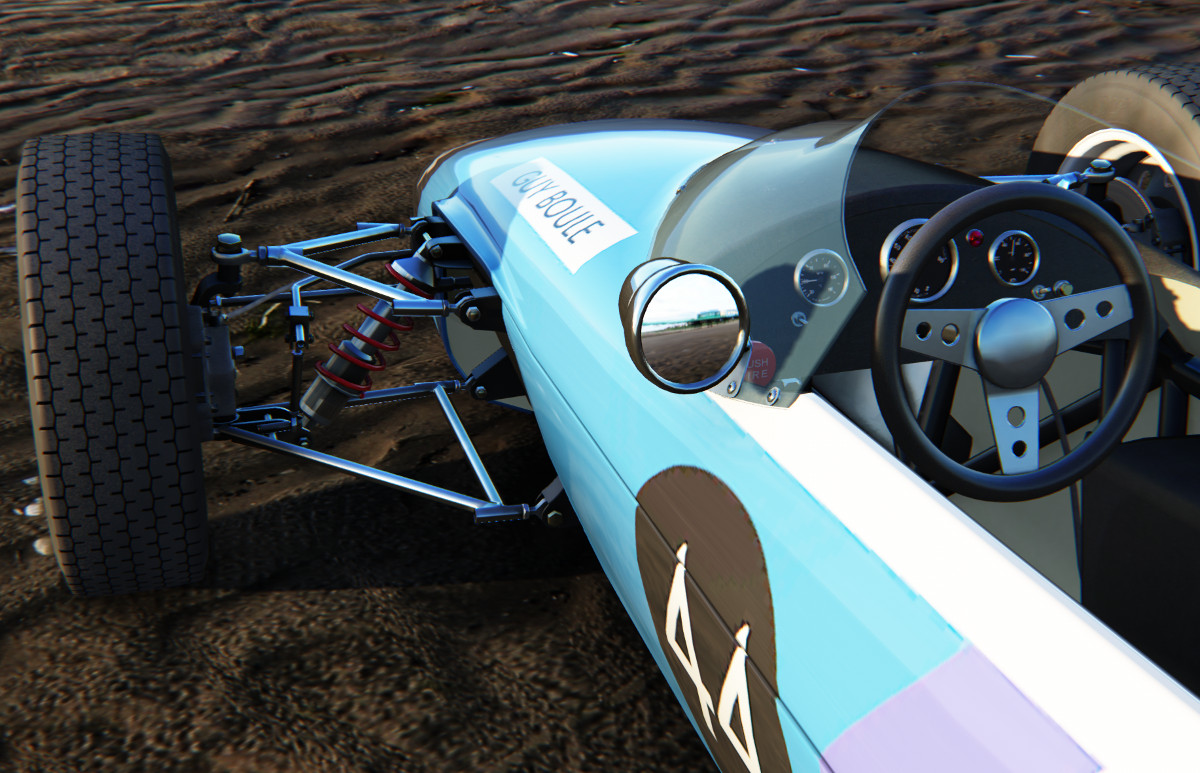 The Mod Itself
It's been a long time coming. I threw the first few pieces together in late 2015, after deciding that AC lacked a straightforward, lightweight no-downforce single-seater. Over the next year I built a fairly complete model, and at the beginning of 2017 I went into what I thought was the final push. Get everything unwrapped, textured, a few final missing objects, done.
Obviously that effort never finished, I had other work to do. It sat untouched for a bit more than a year while I made the Ford F350, Dodge Monaco, played with custom shaders, and worked on another unannounced project. I am not especially good at working on more than one mod at a time. This November I finally made room in my schedule and banged out the final 70-80 object unwraps. (as it stands it has a slightly terrifying 149 separate objects, many of which are animated)
Bringing onboard one of the new shaders allowed a never-before-seen level of graphical accuracy. The brass bolts look like brass. Skins have gloss paint and metallic sheens living in harmony. It's finally looking how I want it.
The long timeline has led to a somewhat uneven quality - the model overall is 130,000 triangles, half what more recent official cars for AC have. Just the nature of hobby projects I suppose. I don't feel like it's lacking, but there are certainly signs of age on the model. Well, 3 years. It happens.

Skin Template
Wireframe and body AO are provided in the car's folder, along with more detailed instructions on what textures to use.

Known Issues
Custom shader is only fully compatible with the original showroom, not the CM one.
With the Shader Lights Patch active, one of the hoses does something weird, and dashboard can get odd shadows. The easiest solution is disable Shader patch entirely. But to be particular, Particles FX and Fake Shadows FX cause problems and can be disabled individually.
Some AI parameters are a mystery to me, I haven't seen them crashing so I haven't tweaked them. I just don't drive with AI enough to find out their issues.

Send me money?
If you enjoyed the car, feel free to donate via Paypal.
Donate
Reactions: tjc, Baird64, luffield and 67 others

To be more specific, I don't drive other open wheelers.

This is the exception to prove the rule.
Huge fun to drive and looks fantastic.
Very good car! The only thing I don't like is how reactive is the car with the steering wheel. Maybe the default setup is too soft for the european tracks. I should spend more time on setups. Thank you for this amazing car! Really apreciate
I't was unexpectedly incredible!!!
Out of all 60's open wheelers in the game, the feel of this car is perhaps the best that I've experienced so far. The only thing I would question is how hard you can crash without ending up with any significant damage. I'd imagine the suspension is quite a bit more delicate than it is here. That said, the car is superb and brings any classic track alive.
Great mod of a straightforward, non-downforce car. Excellent fun and great looking.
Good
Thanks a lot for all your work, this car really is my favorite car in the game!
Tres agréable et bien réalisé !
Excellent car. Very challenging and full of surprises, very believable. Beautiful model and nice array of classic liveries. Raced it today in FUJI 1967 in SRS series. I found default setup really unforgiving, but perhaps I am just not smooth as a driver enough to take full use of default setup. There is a car with super dark windshield, and it is necessary to "lift the seat" to look over it.
Simply wonderful! Beautiful detail. A real challenge to drive, but so enjoyable. A perfect match for the Assetto Corsa Silverstone 1967 circuit. Thank you so much for this amazing car.
Great! But why I can't look back?
Great job!
Superb. Big thanks.
Vraiment cool,merci
Worth more than the $10 I donated.

Stereo
Thanks, I appreciate it.
This mod represents in my view the very best handling single seat car in the entire racing sim world. It also has the best, most naturally authentic single seat racer sound set. It far surpasses the handling of any stock single seater of any class, in ANY sim, including Assetto's Lotuses, anything in rFactor 1 or 2, or AMS, or Project cars.

As someone who raced Formula Fords and F3 in the 70s and 80s I had almost given up finding a sim mod that remotely comes close to an authentic feel, until I found this stupendous mod.

There is a complete myth that open wheel cars from the 1960s or 1970s are inherently unstable at the front end (Assetto Lotus 25 being a terrible example). It is just nonsense. These cars should not drive as though the steering bushes are loose.

This fabulous mod is clearly designed by someone who absolutely understands detailed handling physics, because the feel is spot on. The setup options are comprehensive. You can dial in anything from loose oversteer to sedate understeer or anything in between.

This mod has something else that very few comparable mods have. It has character and enormous charm. My sincere thanks and admiration for the author. This mod deserves maximum stars and I thoroughly recommend it!
Nice work mate really fun car to drive. great to learn car handling with , you can really feel these old low grip tyres and traction shifting with weight transfer. A lot of fun on tracks like Mugello. I'm using custom shader with the options advised disabled. I also love that you made such a detailed description of this car mod. I can tell a lot of love went into this. Great job by all involved in this car. Also FYI: AI seemed to behave very well too so far :-)
Read more…
17 comments
F1 | Mercedes and Alpine Launch 2021 Challengers
17 comments
Assetto Corsa Competizione | Another Hotfix Release Is Here
65 comments
rFactor 2 | February Development Roadmap