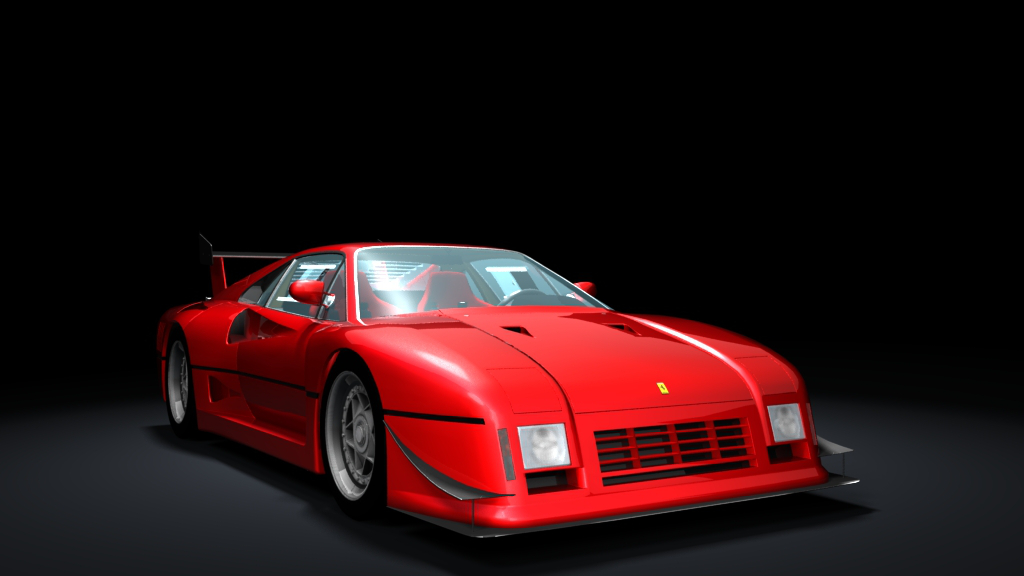 Unlike the 288XX, this car isn't fictional at all, though it's rare enough that some mistake it for an F40 with a body kit. Under that body hides an engine that's built for racing and twin turbos that push it to a ridiculous amount of power, especially considering it weighs less than 1,000 Kgs.


Installation:
Extract the ferrari_288gto_evo folder from the rar file into your cars folder (in your steam installation at: Steam\SteamApps\common\assettocorsa\content\cars)

Skin template usage:
I've included the exterior skin template as a GIMP source file. The layers should all be there, the UV layout, the Ambient Occlusion to bake if needed, and a hopefully easy to use default metal parts layer if your skin is only supposed to change the bodywork panels.

All templates can also be downloaded as .psd files here: https://drive.google.com/file/d/0B-uUDGuiZHAELUZkMnpEQV9yZFk/view?usp=sharing

Todo list/known issues:
* Sounds are still WIP by Fonsecker
* Driver animations look a tiny bit weird steering left. I don't know anything about them so we will gladly live with what we have.

- version 1.1
* Updated backfire intensity, cheers to GTAce for pointing out it's rather tame nature
* Included GTAce's Castrol livery with updated preview to match the standard style.
* Included SchUPpor's Scuderia Ferrari and Marlboro liveries with updated previews to match the standard style.
* Included v0.47 of Fonsecker's WIP sounds. It's still on-going but worth an update as it's a massive improvement.

- version 1.0
* Rebalanced aero. It has ever so slightly better aero overall now and aero balance % has swapped from front to rear.
* Dampers are now adjustable in setup.
* Updated skin preview to match kunos style better.

Gracias y gran trabajo ¡¡¡¡¡
Upvote 0
Finally got around to reviewing it! 9.5/10, seemed to have a very very high clutch but otherwise perfect! Video review here https://www.youtube.com/watch?v=PYMpvBij-VE
G
GTOfire
Cheers for the extensive review. I've never actually noticed the clutch issue, not sure what that could be really, the clutch in AC doesn't have that many parameters you can change. So no promises I can fix it, but I'll try and take a look.
Upvote 0
Loving the latest sound and pant liveries in the latest release of the 288 EVO ... Awesome work.

This Monster car has finally got a ROAR to be proud of,.
Big thanks to @GTOfire the entire team.

Cheers
Jay
Upvote 0
I appreciate the effort. I don't know if the physics are appropriate but the car is close to undrivable with this kind of turbo behaviour.
G
GTOfire
That's exactly correct then. The turbo and torque of the car are based on an actual dynograph readout and match up as exactly as AC's somewhat simplistic turbo behavior will allow.

I'm afraid you'll have to look for the solution to it's drivability in your right foot. This is an 80s racecar, it's supposed to be batshit mental.
Upvote 0
love it
Upvote 0
Awesome mod, can't wait to hear the finished sound! One thing though, the lights don't seem to work in the showroom :(
G
GTOfire
I didn't even know you could turn the lights on in the showroom at all :p

Unless you're talking about the 2 popup lights. They stay down intentionally, the only way to pop those up on the real car was opening up the bonnet and manually toggling them, they didn't automatically pop up and down when you turned the lights on like in the road car. So I decided to just always keep them down.
Upvote 0
Much appreciated and many thanks for this rare gem.
Upvote 0
Amazing work. Thank you.
Upvote 0
NOICE!
Upvote 0
I always dreaming drive this car on assetto corsa. Thanks.
Upvote 0
Another great job,
Thank you.
Upvote 0
@GTOfire,

I was lucky enough to work for a company that maintained and ran one of these rare and exciting cars for a customer for around 12 years or so. The car was always the centre of attention wherever we took it to such as Spa, Silverstone and the Nordschleife, nothing else really looks like or drives like a 288 EVO...

Being able to drive it again around the ring has made my christmas ..
Thank you for all the hours of work you have put into this.