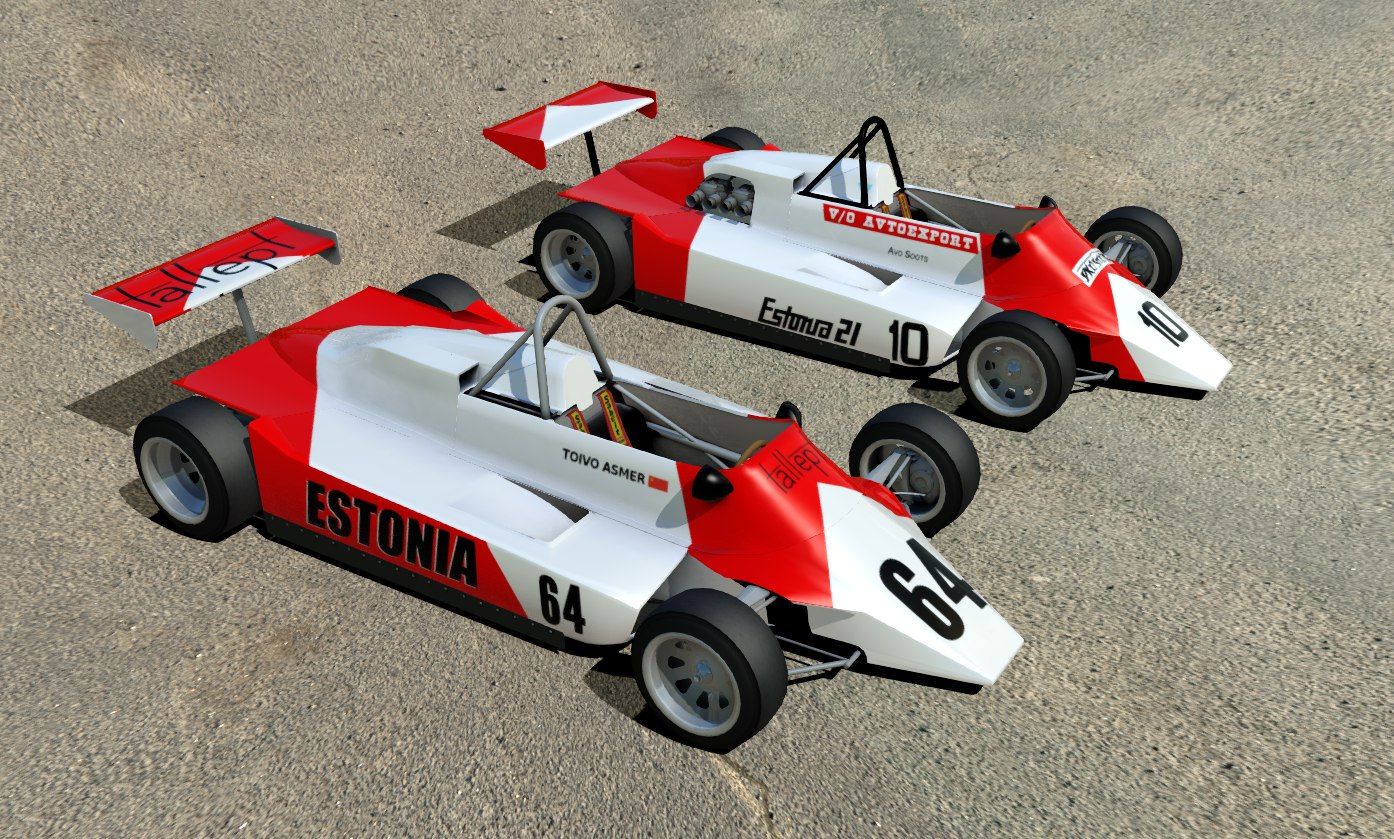 Soviet Union (Estonian Soviet Republic) Formula Easter car. Maybe it was the first car with a ground-effect in Eastern Europe. It was made in 1980 by Raul Sarap in TARK factory. The prototype car was a Lotus-81. It had 1300 Lada engine and 5-speed ZAZ gearbox.

The mod was converted from Ville Sokk's Estonia-21 for rFactor. It took a lot of 3D and 2D changes.

These Formula Easter cars have in very short time grown into one of my favourite mods of AC.
Such beautifull little cars that are great fun to drive and look the part.
I'm running them now in a custom championship and its pure joy.
Really love them.
Thank you very much for this.

jurik1984
Thanks )
The whole collection of Soviet era racers is amazing. These are great cars to learn the basics in.

Just been thrashing them around Oulton Park. Such good synergy between track and car.

Are there any online race events using these cars? I wanna race.

jurik1984
Thanks! Yep - https://vk.com/pfcevents . New season will be at autumn.
Thoroughly enjoying this mod. I know little about this series but it's fun. It seems a bit too grippy to me but I suppose that's the ground effect. I can only compare it to the Ralt RT3 F3 car I raced in the 80s which had ridiculous amounts of grip due to ground effects. Thanks for a great mod

jurik1984
Thanks!)
Thank you very much for this!!!
Good job Thanks, I do not know if the car in real make the same sound for all cars your mods Estonia, Metalex, Melkus etc.
they make a different sound in reality?

jurik1984
Thanks! )
Great little Cars! Thanks for your hard work

jurik1984
Thanks! )
Very nice car! Grip is beautiful! Please remove the driver's head in the cockpit view for best VR experience. Spasibo!
Great car, and unexpected fun :) Do not know much about them so hard to compare to real life cars. Race well with the Estonia 20 it seems.

One note, no car name is shown in game lists and an "real" tyre short_name would be good to (like P or something)

jurik1984
Thank you! It's very interesting for me, because I haven't a lot of information. I'll try to fix it!
Really great car, lots of fun to drive, many thanks.
The car is listed in the 'T's' section for Tark and not E Estonia which may be causing the confusion as to the car not showing for some.

jurik1984
Thanks! TARK is factory.
I unzip the files, but the car won't show on the menu.

jurik1984
Wow... how?! Redownload!
Good car!
I think Estonia was Eastern Lotus or Brabham, they built their cars with extremely limited resorce, but these cars very impressive...
I'm looking forward to your next eastern openwheeler mod!

jurik1984
Thanks! If you want, I have online champ)
cant wait for the next cars :D

jurik1984
1-2 month! And you can race with us in online champ https://vk.com/formulaeasterevents
Nice! Keep supplying us with eastern block cars! I especialy like the MTX Tatra V8.

jurik1984
Thanks) I going to create more Formula Easter cars. Wait for some SU, DDR and Polish cars! And czech )
grazie ragazzi ;)

jurik1984
Prego! )
Amazing car! I love it way more than the Avia and Metalex, also because of the look. It reminds me of late 70s F1 cars :D I love racing with this car against Avia and Metalex, they are really fun to drive.
Keep up with the great work ;)