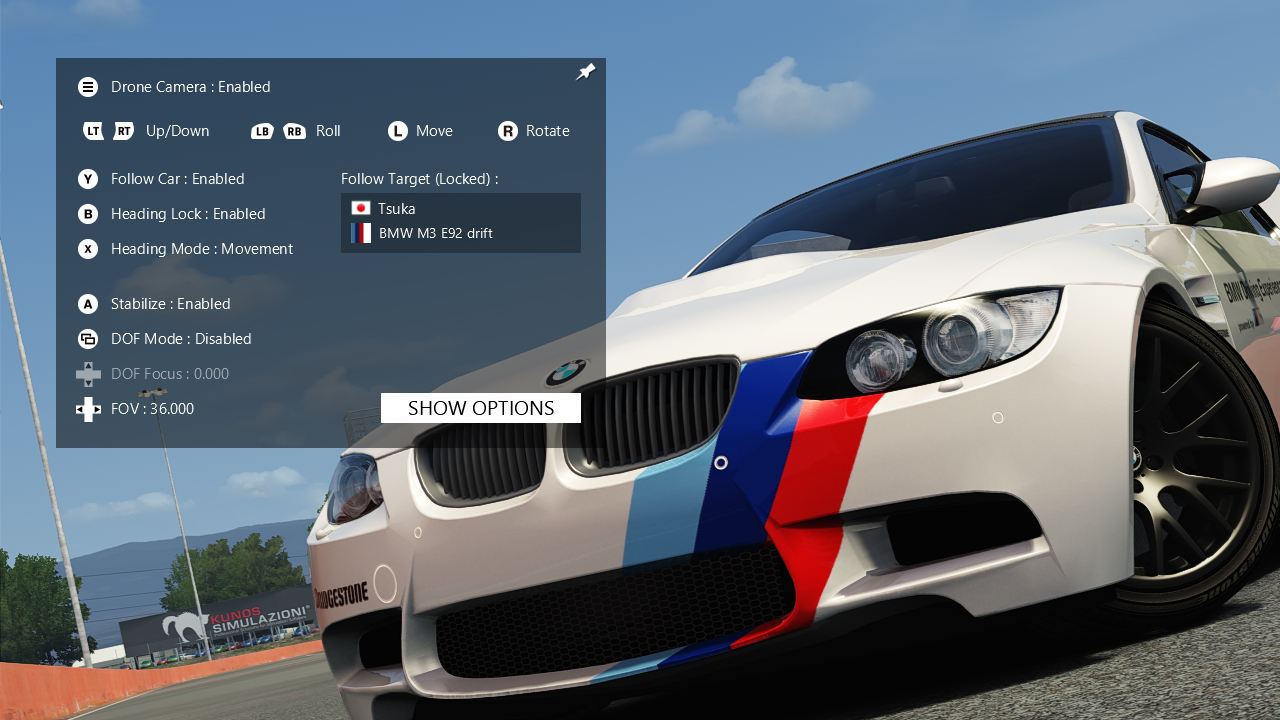 It was developed based on the idea of stereo_joycam.
This camera can follow any vehicle.
It incorporates features extended by CSP, such as FOV and DOF operations.

For Keyboard:
I have no plans to support keyboards at this time, but volunteers are developing compatible versions. (WIP)

The heading lock causes massive stutter in the cameras point of focus. It would be helpful to have a "reset" button, or maybe a few presets to save/load. Forward speed may need a larger range. Guessing off the top of my head it may need to go upwards of 500 or 600 (for "chasing" cars when...
www.racedepartment.com

Really nice for recording footage or for even taking screenshots.
thank you =)
great work. thanks.
Gamechanger
Works really well on Steam Controller, it will be an awesome way to watch race leagues with this or making some videos for mods.

https://www.youtube.com/watch?v=gmB6Da85L2U
Very nice, works very well. The only thing I think this app could use is the ability to record splines like in Camtool2 so you just get your path just right and then worry about running your recording software afterwards.
Awesome app. Really easy to use and fun to make cinematic videos. Thank you.
This is one of the coolest app I've used. It may be limited to a number of people as it uses a controller to control the drone but it is one of the more flexible way to do cinematics. I've test it for an hour and there isn't any hiccups.

The upsides is that, you have a large amount of adjustability like the speed of the camera movement, deadzone (which are very useful for me since my stick doesn't go back to centre after releasing it), and even how smooth you want the camera to tilt or move around. There is a "Follow Car" function, it's make easier to concentrate on how your shots look than focusing on chasing cars down is a good thing. Another is that the ability to capture shots at any angle. Using Camtool 2 for a good amount and switching to this, it just makes certain things much easier without having that heading glitch where it does a weird 360.

The downside is that the "Follow Car" function makes the camera fairly difficult to move into how you want it to look, but I may change that statement as I've only used for a fair while. Another downside is that you are only able to move in a certain area like in a square box but it is suppose to be the improvement on Box Cam.

Some suggestions on changes or additions to improve this mod is to be able to switch between cars on the fly, but I've never made a mod and it may be impossible. Another is the button logo of the "Drone Camera" and the "DOF Mode" should have both Xbox 360 and Xbox One Controller logos since as a new user, I gotten somewhat puzzled how to activate the drone as none of the buttons were on my controller (Using Xbox 360 controller btw).

To summarise, this is an amazing mod that will help more players to create more interesting content for the future.
nice looking app for me that I love making videos with custom cameras. However, I didnt manage to set up my 360 controller with xboxce after severla tests and reading, and it also crashes the game every time I exit, and I need to shut down ACS from task manager...
The device is recognized by xboxce, but not in game. It always says camera disabled........ I hope you fix it ..........

Tsuka1427
If anyone can read this report and fix a bug, it's Esper..........
If you can, post log.txt and py_log.txt to the discussion thread.
Very nice app. Easy to use and packing interesting features. Well done!
can i ask, what track is that
Unfortunately I can't rate it yet as for some reason it won't work with my Xbox360 controller. Premises are there! Four stars upgradable to five if i get it to work!
I can't see it on the the taskbar (I checked all boxes in CM, installed manually, but still doesn't work). But I'll give you four stars, because the idea is awesome.