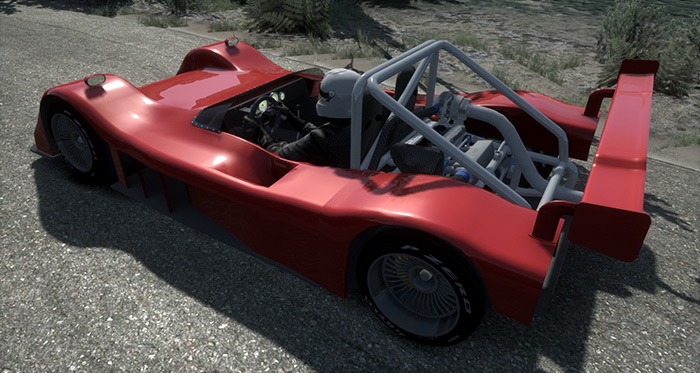 bobskype wrote:
"This is one of my old projects that I started over a year ago for BeamNG. I lost interest in the vehicle, and I haven't touched it until today. I guess I'll start with the name, 2000SL. The 2000 stands for 2.0 liters of displacement in the motor, which is a 4g63t out of a Galant VR4. Putting out more than 400 hp at the wheels, it is driven through a highly modified sequential Mitsubishi gearbox (which came in FWD Turbo Eagle Talons and Mitsubishi Eclipses). I'm not totally sure on a weight for it yet, I figure I'll cross that bridge when I start on the physics.

The SL in the name stands for 'street legal', and that is sort of a grey area as you can see. The idea behind it is sort of like an Ariel Atom, or a X bow. The design was done by me, including the suspension geometry and packaging. All the modeling was done by me in Zmodeler 1.07 (before I learned Blender). The only thing I didn't make on it are the seats, which are done by Dennis W.

I decided I'd throw this up here, for anyone who wants to. I've put a LOT of time into my mod's for AC in the last month or so, along side working full time. It is not at all expected/required, but very much appreciated. 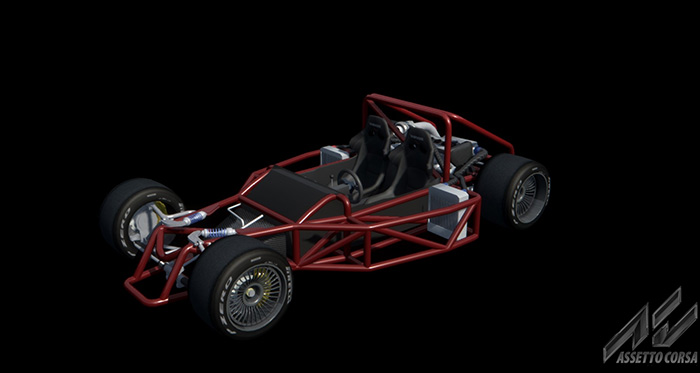 A great mod, really interesting for hill climbs and time attack.
AI is so slow in race, it's a shame.
Upvote 0 Downvote
Not Working for me, return to the menu!! Anyone had the same problem and found a solution? I really would like this mod!!! damn!!!
Upvote 0 Downvote
A true gem! And to have the ability to skin a car and drive it "naked" is something I'd love to see other mods do. Really top notch stuff. Thank you!
Upvote 0 Downvote
Update: I got this to work with a suggested edit to the car's aero.ini file. You need to change the version to 2, and delete all the [data] info only.
Upvote 0 Downvote
Very funny car indeed.
Upvote 0 Downvote
I like this car! I've only recently tried the bare version, and it out-Lotus 49s the Lotus 49. With full traction control and stability control it's actually drivable. It's a handful; it's easy to lose it, but it's also easy to save it when you do lose it. This is the kind of driving that I like best.
Upvote 0 Downvote
i like
Upvote 0 Downvote
A meager amount of body work sitting on a chassis that weighs about as much as a small trashcan with a massive turbo hooked up to the back?