Finally, after five years of work & trying to get a release together for at least the last three, it's ready. This is the Assetto Corsa incarnation of my real-life daily driver/project car. I bought the car secondhand in 2010 and left it alone for the three years it remained under warranty. At one point the front control arms were recalled by Subaru over rust concerns and I decided to just go ahead and replace them with aluminum arms from the STI. At that point it became a "project car," then some stuff happened, and six years and ~$30,000 later, this is the result.

The build itself is quite extensive but I tried to do it all in a way that left the car with as much of its road manners as possible. The exhaust is the quietest 3" system on the market, it has a cat, the springs are only about 15mm lower than stock and I've done nothing to the lighting or the bodywork. It's a bit of a sleeper... but when it wakes up angry, it means business.

I hope you have as much fun with it as I do.

*** Please use CSP version 1.52 or higher to be sure everything works as expected. We did all of the development on 1.52 for what that's worth.

Self-promotion really isn't my strong suit but I can't post this car without bringing to light just how much attention to realism and detail we've put into it. Starting with the most obvious bit, Dan built the entire thing on a full 3d photo scan I took of the real car in my driveway. From there I spent about a week playing photo monkey, dodging rainstorms & getting detail shots of anything that needed it. I then spent a solid week playing the "well actually" game with any and every detail I noticed that wasn't spot-on. It wasn't practical in a game model to perfect literally everything, but I genuinely doubt there's a more 3d-accurate sim mod around. Dan is a wizard. This thing is flat-out fantastic.

On the physics side the car is built from the most accurate and specific data I've ever had for a project. (Unsurprising, I know.) I've logged and matched as many things as can possibly be tracked with my OBD-II datalogger. The entire suspension was measured on a lift and rechecked at static height on the alignment rack. It matches plotted curves to within a couple hundredths of a degree throughout its full travel. The aero data is from a Prodrive wind tunnel session at MIRA & the brake calculations are based on excellent data from the forum autocross community. We ran my dampers on a dyno before installing them and the weight of every modded part, deleted system & lightened bit is taken from real life. To the best of my driving & translation ability & within the constraints of the sim, it's a match for the real thing.

And finally, the sounds. Davide is a generous man and a literal pro - this outcome went far beyond any of my expectations. He was not only kind enough to give us permission to use the soundbank he originally made for the Rally Legends 22B, but he then sent us a modernized update, then a second update customized to more closely fit the mechanical setup of my car. I have to say, allowing for the unavoidable difference between reality and sim when it comes to audio, these sounds are pretty much spot on. It's a mild (sounding) setup with a substantial turbo, so it's civilized enough (and 50-state noise legal) but there's that sinister hiss from the turbo when you step on it.

A project like this also involves a lot of help from others with this bit or that, so a huge thanks as well to @mclarenf1papa for tires & advice, @Giuseppe Abagnale for the rear geometry, @Kyuubeey for help with ARBs and some aero bits, Baker for a great hydraulic brake calculator, and @AlleyViper for the usual CSP adjustment & troubleshooting (and especially for getting the odometer working.) And reaching back a bit, @Storm Rider for helping me import my first bits of data way back in the day, when I knew even less about what I was doing than I do now.

A shout also to the fantastic WRX/STI forum community which has (mostly passively and without their knowledge) provided me with more good data than I've found in the public sphere for just about any other car I've ever worked on. You rock. My brothers.

And finally, if you'd like to make a donation for our efforts, here is my LINK. 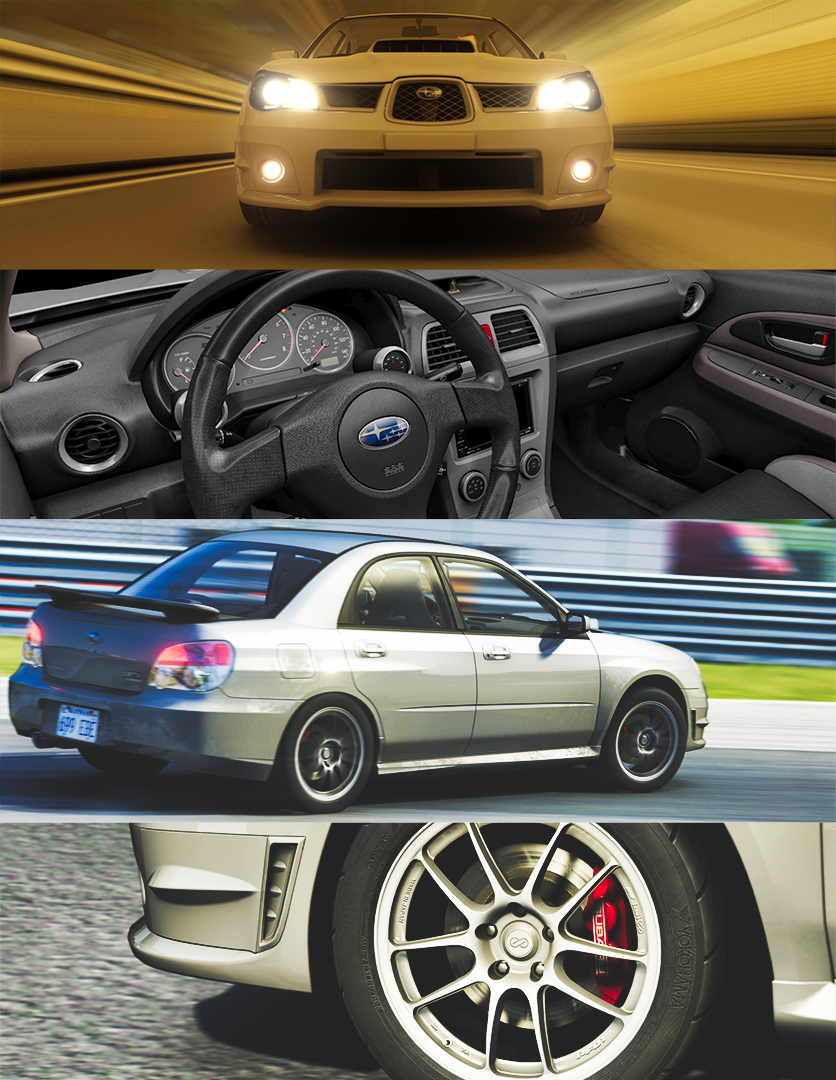 hi, a sublime mod, congrats man!
ps: I wanted to donate something for sharing this pearl, but your paypal link seems to be dead... best check it and put an updated link in the description!
I LIKE THE Project and the story !!! but i thing he have to work at transmision ... wrx hawkeye dosent have lsd , and is hard to handbrake whitout clutch ... you have to work at transmision psyhics , i understand is an tuned wrx but i think you dont have and dccd gearbox whit mechanical lsd , but over that , the car is almost perfect !!!! great job

aphidgod
The limitations of AC come into play here a bit, there's really no good answer for a full-time system with viscous center differential in the two options we have. If you have thoughts on ways of fudging it better, the support thread is always open. :)
Awesome
very good
Sound and physics are excellent, very nice car
amazing physics, models and sound!
Car Drives Excellent, Sounds are super realistic. Nice Job!
Amazing Car. I think it's physicly the best Car in AC i have driven so far. And i have downloaded a lot of Mods. It's the first Car that actualy goes of track while braking in a drift. No other car has done this to me like that in AC and now i understand the saying "dont brake while drifting". All tho it's not quiet good to drift, at least for my taste, but i think that's not what it's intended to. Driven it on the Nordschleife. Quiet fun to drive this thing. The boaty feeling of it is funny and challenging at the same time. Only thing i coud complain about is the weird extended dead zone that i have around the center in comparison to other cars and mods. The sound of the engine is also on another level then AC original Cars. Makes a huge diffrence for me. Kinda building a love hate relationship with this car :D. Thx for all the effort and attempt of perfection.
This car made me smile, not just a simple smile but a full on grin from ear to ear. This thing is beyond fun.
Love the heart put into this, im all about realism. This does not disappoint. Great work.
Very fun. I have only messed with it for a few minutes, but it is very Chuckable and forgiving, but no more than the IRL car
I do not use these words lightly, but this is the best mod car that I have ever driven.

The story behind it, the execution, the taste behind the mods, everything comes together in this one. I especially want to mention the excellent engine sound, which really stood out to me!

I liked it so much in fact that I sent aphidgod 10 bucks to his paypal!

aphidgod
Cheers Alex, thank you. And thank you. =)
Awesome work!
I have been waiting for a quality Subaru mod for Assetto Corsa since the day it came out. I can now say this game is complete thanks to the amazing work of @aphidgos!!! You're amazing dude thank you sooooo much!!!!
Best Subaru mod!
https://youtu.be/8mtX2GgNExM
The day has finally come, ladies and gents. When we finally get a quality and oh-so-crisp sounding WRX mod to Assetto. (which has launch control and even does AWD slides :D ) Thank you for the hours of effort you devoted to this mod, I daily a 2015 WRX and always wanted a good WRX mod in Assetto and you have so graciously granted my wish. This mod has instantly become one of my favorites and the attention to detail is top-notch. Fantastic work.
I like it
Great work
Best suby
My favorite!
Read more…
17 comments
2020 Formula One Bahrain Grand Prix | Discussion Thread
31 comments
iRacing | Update Time And New Track Preview
32 comments
Assetto Corsa Competizione | Hotfix 1.6.2 Now Available
Top Bottom